These days, flagships are defined in two ways -- one, where companies pack in every single feature that their R&D guys create, into one single device, making it the most expensive item in their catalogue. This is consistent with the original meaning of flagship - the ship which flew the pennant of the senior most officer in the squadron and which was invariably their most powerful battle ship in that engagement.

The second, more recent take on the terms seems to be -- the most compellingly priced combo of price and performance with features and design that make sense to the target consumer.

This is the value or paisa vasool flagship.

How ironical that it takes a 'foreign' company like Xiaomi to understand the pulse of this country's buying behaviour to take a phone from its global line-up and customize it to Indian taste and price point. While the Mi 4i of last year was somewhat of a teaser in this direction, the Redmi Note 3 released last week, is a clear indication that here's a company that takes India seriously.

This is the first device in India that ships with the latest Snapdragon 650 processor under the hood. Xiaomi claims that this processor has excelled at every single benchmark test in the world. Having used the device for a while now, we can not vouch for the fact that it does not have the heating issues that other Snapdragon processors have become infamous for, nor does it have apps hanging in the middles of a session. With hand-picked features like a dual-channel memory (The memory has two separate units), a dual image signal processor (for faster focus and better image quality) and in-built fast charge capabilities (50% in 1 hour, and 3 hours for full charge), the Redmi Note 3 has enough brute force to power it.

But what does this translate to, for the everyday smart phone user? The simple answer is: a handful of features that are cleverly thought out. Take the fingerprint sensor for instance. Xiaomi claims that the Redmi Note 3 has the most ergonomically designed fingerprint sensor ever. The 360 degrees recognition sensor can store up to 5 fingerprint profiles, and lets you programme your fingerprints to fire up apps and websites -- even third-party apps. With the LastPass function, the device is the first of its kind that allows you to use your fingerprints for opening Net Banking sites, movie ticket and flight booking sites, even e-commerce gateways.

The strategically located fingerprint sensor (right below the camera) lets you perform some acrobatics with the device as well. You can, for instance hold it up and take a selfie from its primary camera. The fingerprint sensor also acts like the camera key. If 16 MP selfies interest you, rather than a 5 MP photo with the front camera, you can always indulge yourself with the Note 3. Of course, you might end up looking slightly funny if you were to do this in public. Having taken your selfie, the device has DSLR-level image processing using something called PDAF (Phase Detection Autofocus) for super fast image processing with accurate white balance.

The Redmi Note 3 features two more interesting imaging-related features that make it stand out. Something called Sunlight Display automatically adjusts the text on your screen to ambient light conditions so you can still view fairly light lettering with ease. And, a reading mode ensures that the blue light filter is reduced when you read in the night, making it soothing for your eyes. Xiaomi actually claims that this feature gives you better sleep. The things smart phones do these days!

The Redmi Note 3 is manufactured made in India, and is currently available for online sale on mi.com and Amazon. The 5.5-inch full HD device comes with a 4050 mAh battery, a full metal body and dual 4G SIM slots. It costs Rs 9,999 for the 2GB RAM, 16GB internal storage model and Rs 11,999 for the 3GB RAM and 32GB storage variant.

If this is the trend of flagship devices in 2016, we're all for it!

The Redmi Note 3 is one of the first phones in India to support VoLTE technology. This stands for Voice over LTE and it is exactly what it says: voice calls over a 4G LTE network, rather than the 2G or 3G connections which are usually used. The big advantage of VoLTE is that call quality is superior to 3G or 2G connections. VoLTE has up to three times more voice and data capacity than 3G and up to six times more than 2G GSM. LTE or Long Term Evolution is the jargon for 4G technology. 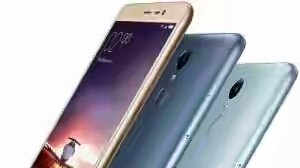